Book of Dead is undeniably one of the most popular online casino slot games. As a result, you’ll find it at dozens of slot sites in the UK and worldwide. But, unless you understand the fine nuances in slots, you may be surprised to find out that this Ancient Egyptian slot can perform dramatically different depending on where you play. It also helps to know which casinos are also offering Book of Dead Free Spins bonuses to new players, be that on registration or the first deposit. So, choosing the right Book of Dead online casino can go a long way for any type of player.

In this guide, you will find Book of Dead bonuses and slot sites that offer the best return to player (RTP) for this game. We will also briefly touch upon the game stats and its main features, as well as a list of Play’n GO slots from the same series or the same expanding-symbol-bonus concept. But first, here are the most valuable slot sites that offer Book of Dead free spins. 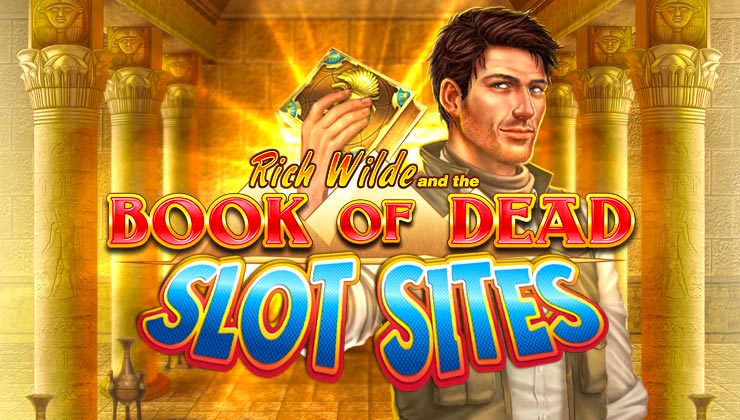 Try these Book of Dead sites in January

Here’s a list of the UK casinos with Play’n GO slots that also offer Book of Dead free spins on registration or the first deposit. This includes Book of Dead bonuses that have no wagering requirements and exclusive offers.

#AD First Deposit Only. Min. deposit: £10, max. Bonus £50. Game: Book of Dead, Spin Value: £0.1. WR of 30x Deposit + Bonus amount and 60x Free Spin winnings amount (only Slots count) within 30 days. Max bet is 10% (min £0.10) of the free spin winnings and bonus amount or £5 (lowest amount applies). Spins must be used and/or Bonus must be claimed before using deposited funds.Deposit/Welcome Bonus can only be claimed once every 72 hours across all Casinos. New 18+ players only. Gamble responsibly. Full T&C apply.

Book of Dead, like most Play’n GO slots, has six possible RTP configurations: 96.21%, 94.25%, 91.25%, 87.25%, 84.18%. You can read more about the differences in the percentages in our payouts guide, but if you’re looking to maximise your win potential in this Rich Wilde slot then accept no less than the maximum RTP.

MOBILE FRIENDLY
Mvideoslots.com is an affiliate website that offers free information about online slots, online casinos and everything related to online gaming. We may earn affiliate commission when someone signs up and plays at an online casino that we have on our site. This helps my team and me run this site independently from the sites that we promote and continue to provide you with unbiased information. We only promote those casinos which we have investigated and are trustworthy. It is our mission to help you find a casino that you are happy with and that’s why we always choose our partners with integrity.
AD DISCLOSURE >
rankslot site
Book of Dead rtpslot providers
editor's ratingsecure link
1.

Inspired by the likes of Indiana Jones, the theme of Book of Dead has been a classic since the beginning of casinos as we know them. Despite its popularity, the game is pretty much a copy of Novomatic’s platinum slot, Book of Ra. Everything from symbols to their values is the same. And that was most likely the intent of the developer, who took a proven concept and made it available in more markets through new and existing partners. Unlike Book of Ra Deluxe, the Riche Wilde version is more tailor-made for online play. That’s mostly for its nicer graphics, though it’s subject to personal preferences and habits like playing slots in pubs or brick and mortar casinos, but also because Book of Dead has a higher maximum RTP. But as you’ve seen above, that’s something only a few casinos can dare to point out.

BoD with its 10 pay-lines and 5 reels is a very easy slot to play. That’s because it only has one main feature: the free spins bonus with a special expanding symbol. The key to it lies in getting 3 or more scattered Book symbols. Before 10 free rounds commence, an ordinary symbol will be randomly chosen to act as a special expanding symbol during the entire free-spin sequence. Should that symbol appear on three or more reels, it will expand to cover all three positions on those reels. It will then pay out according to the paytable, whether the symbol appeared scattered or not. 10 free spins may not be all you get, because for 3 or more Scatter symbols the bonus will re-trigger for an additional 10 free spins.

It’s in this bonus where the maximum win of 250,000 coins or 5,000x the bet per spin can be triggered. The probability of the maximum exposure of 5,000x bet is 1 in 37,500,000. While it’s not a huge multiple in today’s context, it is a dream of many slot enthusiasts, some of which have been lucky to fulfil their dream even during a live stream.

One of the key features that often differentiates this book slot from others is the gamble feature. After each successful spin, you can play the optional Gamble round to multiply your prize by correctly guessing the colour or suit of a golden mystery card. As such, you can double or even quadruple your win every time you want to add some more spice. Beware that doing so will have a significant impact on the long-term payout.

Another reason why Book of Dead has outperformed so many other copycats is the vast number of betting options. Players can choose to bet 1-5 coins per line, while each coin can be valued at 0.01, 0.02, 0.03, 0.04, 0.05, 0.10, 0.20, 0.50 or 1. That means you can wager anywhere from 0.10 to 50 credits per spin. Although players can also disable pay-lines, it’s not something that we’d recommend as this would have a significant impact on the already high volatility and may ruin the experience.

The “original” Book of Dead was released on 14 January 2016. Since then, this genre has exploded, making way for a variety of copycats and alternatives, as well as their own sequels. Book of Ra is perhaps the most well-known slot in this genre, but its availability makes it difficult to find at most slot sites. Other Book of Dead alternatives include John Hunter by Pragmatic Play, Book of Shadows (Nolimit City), Book of Oz (Triple Edge Studios), Eye of Dead (Blueprint) and Book of 99 (Relax Gaming), to name a few.

Ironically, Play’n GO itself is the largest producer of similar games. Book of Dead series was followed by the following releases, all made by the same developer:

All the above have minor tweaks but are largely from the same genre and with the same expanding symbol in the free spins. Bonuses aside, the other differences that also come into play are the volatility, maximum payout and the rough estimate on how likely it is to trigger in any session.

If you like the original game, then feel free to explore the other games. If you feel that Rich Wilde and the Book of Dead is too boring or volatile for you then you can also pick something that has a lower risk-reward ratio. You may also like their Merlin-spinoff slots like the Rise of Merlin, which can have not one but all regular symbols expanding in the bonus!

Whatever your journey was to this Book of Dead slot sites guide, I hope you’ve found some useful information to help you get an edge at this iconic game that has also made it to our best slots to play list. After all, there is a lot more to this game than it may seem. The bonuses like free spins can help you get to know the game with some extra leverage on the balance side; the average return to player or RTP can be a significant bottleneck if you choose to play this title for longer; and it may help to know some of the similarities that this release shares with some other online slots.

If you liked this overview, then be sure to check out one that we made around two other flagship casino games: Starburst and Rainbow Riches.

Where to find Book of Dead free spin bonuses?

Book of Dead bonuses, such as free spins on registration, are fairly common at online casinos. We have compiled a list of UK licensed slot sites that offer such welcome bonuses to new players, so have a look and save your time!

How to find Book of Dead RTP?

Book of Dead return to player or RTP is often shown in the game sub-menu. However, it has become common practice to hide such important details from customers for whatever reason. Nevertheless, there are ways to determine the actual RTP that the casino uses, which is a hassle for the average player who just wants to play the game. To help you in cases like this, we have done the research for you and highlighted the RTPs at more than 15 chosen casinos.

Why is Book of Dead so popular?

There are many reasons, including but not limited to a concept that is familiar to generations of casino players, a wide variety of betting options and intuitive gameplay with a captivating bonus.

Can I play Book of Dead for free?

Yes, Book of Dead is available for real money and demo play at most online casinos. In the UK, however, only registered and verified casino customers may have access to the practice play mode. An alternative would be to use casino welcome bonuses like free spins, which allow to try the game with less risk.