If you play slots online then chances are you know at least one Big Time Gaming game. Whether it’s their flagship slot Bonanza, one of their best music slots Danger! High Voltage, or a TV-show branded one like the Monopoly slot, it’s the innovative features, high win potential and high volatility that makes them stand out from average games. BTG also pioneered the MegaWays mechanic with previously unseen 117,649+ ways to win. Here you’ll find my latest Big Time Gaming reviews and more info on the company and founder.

Big Time Gaming only releases a handful of games each year (just 7 published in 2019), so when they announce something new it has the potential to be the next hit. Read on to find out what these fresh titles have to offer.

Here’s the rest of the reviews with MegaWays and the more traditional pay-lines. Mind you, they are all medium to high variance/volatility/risk! The good news is that they offer some of the highest win potentials of any non-progressive online slot, featuring max wins of 50,000x and more, with no other cap on winnings otherwise. You’ll also find classic features like Free Spins bonuses, Stacked Wilds and symbol reactions, which adds the potential for more back-to-back wins to each spin.

Who Wants to be a Millionaire: Mystery Box™

If you’re looking for Big Time Gaming casino bonuses then your best bet is to check out these recommended and licensed slot sites, which are also good partners of BTG. Feel free to use their welcome bonuses and special promotions to try out the games with extra credit.

NetEnt bonus
Get 20 Cash Spins
Get the bonus

Brilliant casino with not so brilliant design. Could you live with that?

It's one of those casinos where everyone should have an account 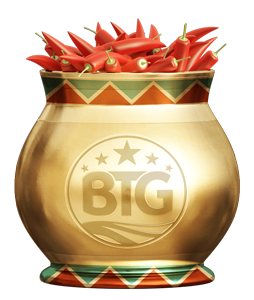 Big Time Gaming was founded by Nik Robinson in 2011. Originally from Yorkshire, UK, he moved to Sydney, Australia to pursue his start-up vision. This is where the privately-held game studio is currently headquartered with a team of the size of a football team: that’s only a fraction compared to big developers like NetEnt or Microgaming.

Based on the portfolio of 20 games released until 2020, BTG video slots stand out not so much with their graphics but with math (unique game mechanics) and uncommon approaches to slots development in general. Occasionally, they also release branded content like the Who Wants to be a Millionaire series, Monopoly MegaWays, as well as music slots like Gold (Spandau Ballet – Gold), Lil Devil (The Cult) and The Final Countdown (Europe – The Final Countdown).

All of their games are original and offer anywhere from 20 to a whopping 586,971 ways to win! It was the introduction of trademarked MegaWays feature that made it possible to surpass the 243- and 4,096-ways boundary to completely new heights the iGaming community has ever seen. Or as Nik Robinson, the CEO at Big Time Gaming put it in an interview with iGamingBusiness.com:

We had almost nine decades of three-line slots before they evolved to single-line five-reel AWP club slots in the 1970s to eventual 20-line five-reel video slots in the late nineties, to 3x5 243 ways and eventually up to 4,096 ways in the noughties and then nothing else significant happened.

The very first MegaWays slot to land on Earth, which you can still play today, is Dragon Born which came out in 2016. With only 6 reels and up to 117,649 ways to win, the game achieved something that no other before it, in smooth, uninterrupted gameplay thanks to BTG’s bespoke and in-house MegaWays engine.

How does MegaWays work?

In a nutshell, MegaWays generates a random number of pay-lines and a random number of symbols per reel (within seconds). There can be up to 7 icons per reel on each spin (7x7x7x7x7x7 = 117,695 ways to win). Regardless of how many lines you have, wins are awarded on left to right for adjacent symbols regardless of size – this makes it easier to follow than it sounds! Besides, bets start from as low as £/€0.10 – £/€0.20 per spin, which is good news for most casual players looking to maximise their playtime.

However, this novel approach to making slots didn’t take off until the introduction of Bonanza in late 2016, which in addition to MegaWays also featured cascading symbols (aka symbol reactions) and an Unlimited Multiplier in the Free Spins bonus. This turned out to be an instant success that got BTG a massive fan base and popularity across online casinos and streamers worldwide. We still think it’s one of the best slots to play for anyone looking for some extra buzz which the higher volatility offers.

Reassured by the accomplishment, Nik and his company started to license MegaWays to other game developers, who can tweak it to some extent to their liking. Today you’ll find games with this engine from providers like WMS, Red Tiger (NetEnt), Blueprint Gaming, Fantasma, iSoftBet, Stakelogic, Relax, NextGen Gaming and more. Many of them have implemented the feature in new and sometimes even better ways, so they’re well worth checking out!

💡 Did you know? — MegaWays is available in the US at the Golden Nugget Online Casino since August 2019. What’s more, the actual land-based slot machine cabinets will be installed in Vegas casinos in the near future! 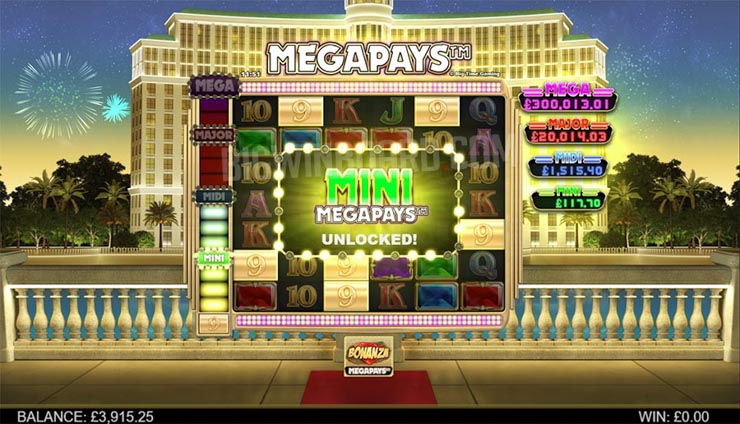 The all-new jackpot network will be introduced for the first time on the developer’s most iconic game: Bonanza MegaPays. The jackpot game is random and when triggered, will be played out on different, 6×7 reels and the Bellagio Hotel in the background. Before the game begins, one symbol will be chosen at random to act as the MegaPays symbol. Each time you spin the reels and collect one of those special symbols, it will be added to the sidebar. A jackpot is guaranteed starting with 4 symbols, as follows:

What’s so special about the aforementioned Big Time Gaming grid slots is the sheer number of symbols which can be at play on the screen at once. You can find more than 300 icons reacting on the grid at any one time, including Roaming Wilds and increasing multipliers during a free spins bonus!

MegaQuads is yet another variation of the studio’s intricate math models, which you can try in games like Slot Vegas MegaQuads. Featuring more than 16 million ways to win, MegaQuads can skillfully combine four independent slots into one mega slot with massive potential. That is, if you can get through the hours of the calm before the storm!

Big Time Gaming is one of the hottest online slot developers today. A lot of the company’s success is due to the management, which has over 30 years of experience, as well as Nik’s intuition and openness to players’ feedback. While their games aren’t made for everyone due to their extreme risk/reward ratio, the company has built something that will have an impact on the industry for years. Hope my reviews prove useful in finding your next favourite.
Good luck!

Here are some good-to-know facts about this Australian developer.

What are the best Big Time Gaming slots?

Some noteworthy BTG slots other than Bonanza are White Rabbit with a Feature Drop, and Donuts with lots of multipliers and freespins! If you’re a fan of oldies music, then check out their “music slots” like Danger! High Voltage, Lil Devil, Gold, and Holy Diver.

The most popular Big Time Gaming slot is Bonanza MegaWays.

Where can you play Big Time Gaming slots?

Given their popularity, BTG games can be found across hundreds of online casinos. One noteworthy slot site where you may find their new games earlier as exclusive releases is LeoVegas.

The average RTP across 19 BTG online slots is 96.35%, which is very good. It’s also important to note that the RTP is the same across all casinos, meaning operators cannot choose which one they offer to their customers.

Can you play Big Time Gaming slots in the UK?

Yes, you can play BTG slots for real money at many UK online casinos, because the games are licensed and approved by the UK Gambling Commission. However, some features like Feature Drop in White Rabbit and Extra Chilli, is not available in the UK due to local regulations (as with other game providers).

There is no doubt about the integrity of Big Time Gaming slots as each one is thoroughly tested 6-7 months before release to pass stringent evaluation required by various jurisdictions. BTG games are licensed in the UK, Alderney, Malta, Gibraltar, and British Columbia, and certified by numerous other jurisdictions worldwide.