Push Gaming is a privately held game developer that was established in 2010. Over the past years, they have released some of the most thrilling and immersive slot games. This includes unique titles like Jammin’ Jars, Fat Rabbit, Razor Shark and The Shadow Order. By steering away from a conveyor belt approach to development, this UK and Malta based game studio is an epitome of the quality over quantity and “Players First” mentality. Here is everything you need to know about this developer and the best slot sites where you can play their games.

Push Gaming creates their games in-house, from start to finish, ensuring that no two releases are ever quite the same. They have just over 20 (mobile-optimised HTML5) games because they release only a handful of titles each year. Here are some more recent reviews.

Here are more of their slots that we have reviewed.

Push Gaming slots can be currently found at select licensed UK slot sites only. Keep in mind that from 1st July 2021, some of their popular slots have variable RTPs, ranging from standard RTP to the 95% and 90% variants. If you want to maximise your chances of winning and ultimately the bang for the buck, then it’s important that you check the RTPs at each casino. Here are some top-tier sites where you will find most of the premium slots made by Push Gaming. 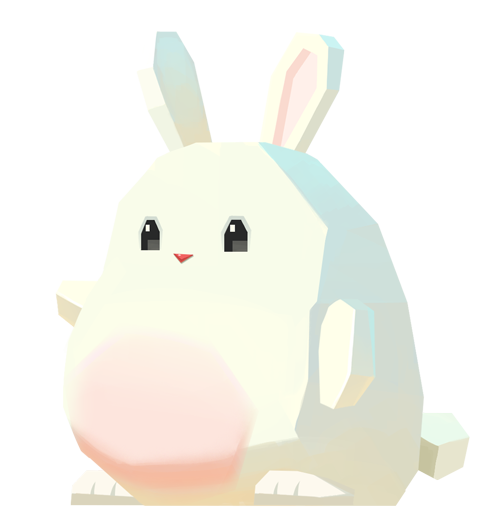 Push Gaming was founded in 2010 as a bootstrapped startup that was repurposing land-based content for online play. After a while, they transitioned into developing exclusive titles for a group of casinos. The acquisition of the Game Server Integrations (GSI) in 2020 marked another turning point, giving them even more control over publishing and differentiating themselves from the competition.

Push Gaming has more than 70 employees in offices in London and Malta, with one of the two co-founders, James Marshall as CEO. He also quoted:

We ensure that all our games themes are engaging, our features unique and captivating and our art, stunning and precise!

Push Gaming games are certified across multiple regulated European jurisdictions, including Sweden, Denmark, Malta and the UK. Their games can also be found in Canada, Spain, Italy and Latin America.

Their goal is to make games that are not just played for novelty but provide an experience that was not there previously and which resonates with all types of players. Perhaps that is why they have shown a 60-70% success rate with fewer games produced over a lifetime than some studios release annually.

Their drive to deliver an immersive experience and create highly entertaining products has led to the creation of such popular titles as Fat Rabbit, Jammin’ Jars and its sequel, and Razor Shark. Let’s take a quick look at some of them. 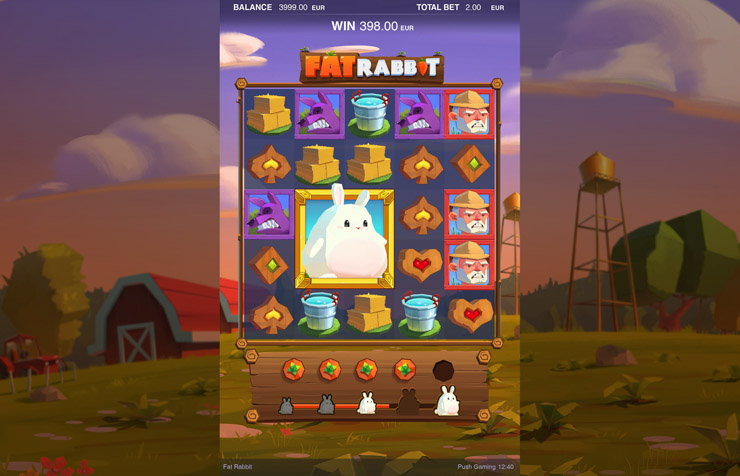 Fat Rabbit was one of the first slots that they made, featuring a playful cartoony theme that greatly diverges from the classic dark Vegas motifs. As evident from streamers’ reactions on social media and YouTube, the fluffy protagonist can produce some serious wins of more than 4,000x bet, thanks to the game’s progressive free games feature. Fans can expect a 2021 variation of this mechanic in the upcoming Fat Drac slot that is scheduled for release in October!

Based on Push Gaming’s first cluster pays aka grid slot, this 2021 sequel has been a major talking point among slot enthusiasts since it was announced. As I wrote in the Jammin’ Jars 2 review, the part two is just as well made if not even better, keeping all the beloved features from the original and adding new ones that seem to fit perfectly by today’s player expectations. This includes the Giga Jar feature presented in the video above, that can generate some finger-licking wins of up to 50,000x bet. 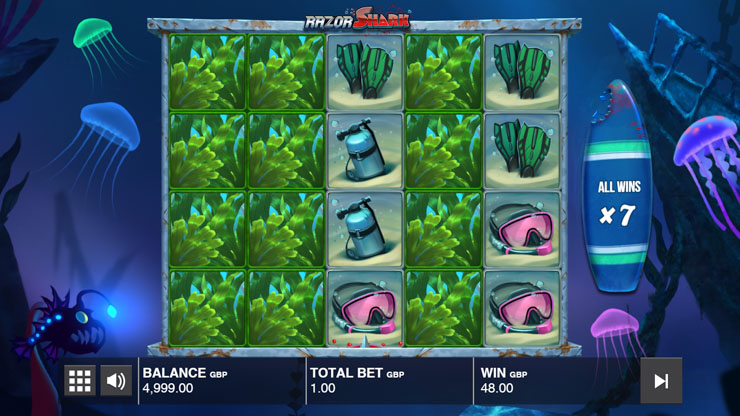 Rocking the highest observed win of more than 85,000x bet, Razor Shark is another Push Gaming blockbuster slot that has got it right in many ways. The key features here are the unlimited Free Games with Mystery Stacks and the infinitely increasing win multiplier. This is an underwater slot like no other. Fans of the coins mechanic should try their newer slot Dinopolis as well.

Each Push Gaming slot is unique in its own way, so there is no shortage of special bonus features. Here is a couple that is worth highlighting. 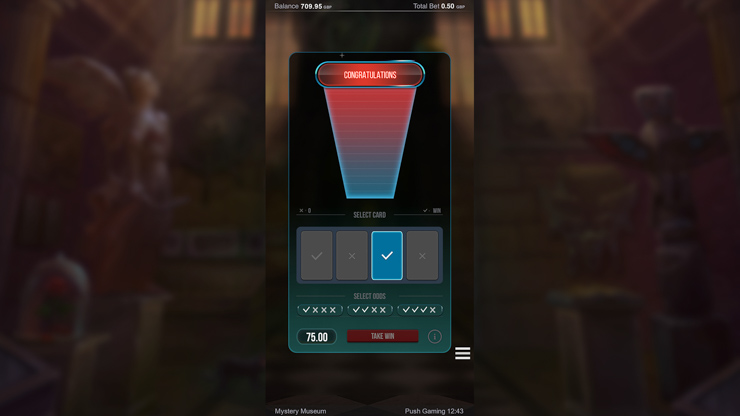 It’s an innovative “double-up” type feature where players can gamble winnings of greater than or equal to 2x, 5x, 10x, 25x or 50x, for a feature trigger or greater winnings. The feature is available in slots like Mystery Museum.

Another neat trademarked feature which is also one of my favourites is the Hypermode. Introduced in their Joker Troupe slot, this unique mechanic exponentially increases the pace of free spins with endless retriggers. You will also find it in their 2021-released slots like Land of Zenith, which you can see from my video above.

Operators have no shortage of games, so it’s quality entertaining games that they now need.

Cluster Pays is not their innovation per se, but Push Gaming has nailed it with both Jammin’ Jars and The Shadow Order. Check them out if you’re looking for a different type of slot experience.

Push Gaming slots have variable RTP (return to player), which means it may not be the same across all casinos. The good news is that only three of their popular slots have changing RTPs:

Nicola Longmuir, Push Gaming CCO, explained why they jumped on the variable RTP boat like some other developers:

Variable RTPs allow operators more flexibility within the overall player experience. We have also taken every effort to ensure that players choosing to play one of our games will be aware of the RTP in play from the game loading screen, as of Thursday 1st July 2021. We are also working on introducing even more measures that go beyond mandatory requirements in the coming weeks, which we will communicate to you shortly.

Other than that, their slots have some of the highest return to player percentages. Here are a few more examples:

It should also be noted that most of their games are played on high variance, so however favourable these percentages may not appear, the balance can move drastically in either direction over the short run.

Push Gaming may not be the biggest game developer that the online casino market has seen, but they may be one of the greatest in the eyes of many players. Every company strives to deliver the most entertaining and premium content, but very few have delivered on par with Push Gaming’s success. Many of their slot games get high marks for not only thrilling features but also graphics and sound effects which add to the holistic experience. In today’s fierce competition, these seemingly small details play an increasingly important role and set apart truly great games from the average. Something, which this studio has mastered.

Read our Push Gaming slot reviews to find out more and check out our recommended casinos where you can try them out today.

Push Gaming’s journey over the past decade has been an amazing ride. From humble beginnings as a bootstrap start-up, we’re now at the point where we’re ready to compete with some of the best in terms of technology supply.

What are the most popular Push Gaming slots?

Some of their all-time most popular games include Fat Rabbit, Jammin’ Jars and Razor Shark.
Does Push Gaming have progressive jackpots?

Yes, you will find local progressive jackpot pools on their slots Power Force Villains and Power Force Heroes, as well as must-drop jackpots on their new 2021 slot called Mount Magmas.
Where to play Push Gaming slots for real money?

You will find their games at online casinos in the UK, Sweden, Denmark, Malta and more.
How good is Push Gaming's RTP?

Yes, their games are licensed by the UK Gambling Commission and are legal to play at the UK slot sites.
We use cookies on this site to enhance your user experience. By clicking any link on this page you are giving your consent for us to set cookies. Privacy policy Ok