Play’n GO is the creator of some of the most successful online slots. This includes blockbuster titles like Book of Dead, Reactoonz, Fire Joker and a whole set of branded slots, including music bands like Sabaton and Twisted Sister. The studio is also among the biggest, releasing as many as one game per week in 2020. Chances are there is at least one game that will catch your attention. Read on to find out more about the company and some of its best slots to date.

The majority of UK-licensed slot sites offer Play’n GO games and then there are some which also give away Play’n GO bonuses like free spins on Book of Dead. I’ve ranked these sites based on bonuses and the RTP percentage on Book of Dead.

The welcome bonus is given as follows: 20 spins on Book of Dead and 100% bonus upon first deposit. Another 40 spins on Fruity Friends on the second day, and an additional 40 spins on Starburst on the third day. New depositing players only. Min deposit: £20. Wagering requirement on the bonuses: 35x within 21 days. Bonus added automatically on deposit. Betting restrictions apply. Terms and Conditions apply.

Welcome bonus
EXCLUSIVE
Get 100% Bonus Up to €/$100
SlotsMillion

Casino welcome bonus
Get Up to £100 New Player Bonus
Bet365

Maximum bonus is €/$123. Max bet with bonus is €/$5. No max cash out. Wagering is 50x – Skrill & Neteller excluded. Eligibility is restricted for suspected abuse. Cashback is cash, so no wagering. Cashback applies to deposit where no bonus is included. New 18+ players only. Gamble responsibly. Full T&C apply.

The Extra Spins wagering requirement is 35x and can be used on Starburst. Max cashout £100. No code needed. New 18+ players only. Gamble responsibly. Full T&C.

Free spins as part of the welcome bonus can be played on either: Wild Wild West, Finn and the Swirly Spin, Spinsane, Aloha, Starburst or Joker Pro. Min deposit: €/$/£20. Skrill and Neteller deposits don’t qualify. Wagering requirement: 40x bonus within 30 days (non-sticky bonus). NOTE: 10% cashback on on all lost deposits, the next day. It can be left to build up, redeemed and withdrawn immediately, or redeemed and played with no wagering requirements. Game weighting applies. New 18+ customers only. Play responsibly. Full T&C.

Welcome bonus
Get up to €750 in Welcome Bonuses
Vegas Baby

Welcome bonus
Up to 55 Free Spins on Starburst
O'Reels

Free Spins on Irish Luck (Eyecon) and Starburst (NetEnt). New players only. Wagering occurs from real balance first. 50x wagering the bonus or any winnings generated from free spins, contribution may vary per game. Available on selected games only. The wagering requirement is calculated on bonus bets only. Bonus is valid for 30 days/ free spins valid for 7 days from issue. Max conversion: 3 times the bonus amount or from free spins: £20. Excluded Skrill deposits. Full terms apply.

New customers making their 1st dep only. Min dep + stake £10 on slots only. The spins will have an in-game value of £0.10 per spin. Claim required. Can be claimed once, Mmx 50 Bonus Spins on Starburst. 40x wagering within 30 days, 6x conversion, £5 max bonus stake. Full T&Cs apply. 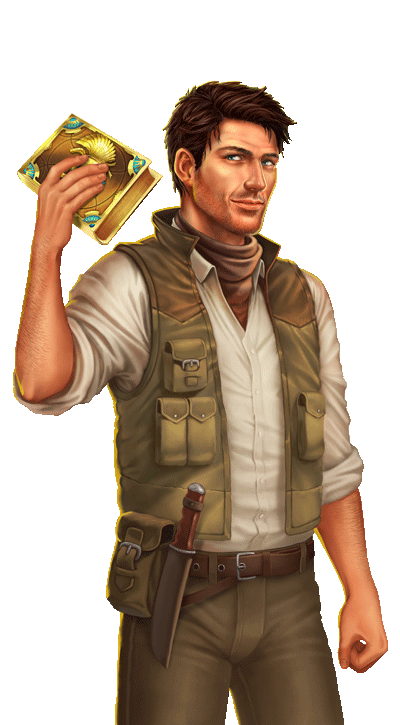 Play’n GO is a private iGaming company that was founded back in 2005. However, it wasn’t until 2014-2017 when it really started to take off with hit releases like GEMiX, Book of Dead, and Reactoonz, which are also featured in our Best Slots guide.

As of 2020, the company had over 350 employees in offices based in Hungary, Philippines, Malta, UK and Sweden, their Växjö headquarter. John Törnqvist is the co-founder and has been the CEO from the beginning.

Below I’ve attempted to sort their games into themes and categories which stand out the most and characterise their portfolio as of 2020.

The studio has over 150 online slot games, many of which are certified in 16 jurisdictions, including Belgium, Malta, Romania, and the UK. Perhaps the most popular are the “book” slots which got their name after Novomatic’s Book of Ra slot and its special expanding symbol in the free spins bonus.

What started with Rich Wilde and the Aztec Idols back in the days, now includes over a dozen successors and remakes. This includes Tome of Madness, Legacy of Dead, Doom of Dead, Rise of Dead, Doom of Egypt, and The Shield of Athena.

👍 Tip: Many Play’n GO slots offer the double-up feature but none come with the bonus buy option.

We don’t offer the possibility to buy your way to bonus rounds, because we want our game to be fun to play throughout. We want to take the player on a journey, learning the mechanics and the design as they play. Both base and bonus play should be exciting and rewarding.

The developer is also known for a good number of branded games. Among them is the Hugo series of slots, based on the popular Danish troll that entertained the video games crowd back in the 90s. This includes Hugo, Hugo 2, Hugo’s Adventure and Hugo Goal.

Other branded Play’n GO slots include Nyjah Huston Skate for Gold, which is based on the popular street skater.

When talking about Play’n GO, it’s impossible to go without mentioning their mega-popular grid slots – slots that have no reels that spin but symbols that pay in clusters anywhere on the screen.

Their first hit was Energoonz, which really stood out back in 2013. Other great grid aka cluster slots games followed, including GEMiX, Cloud Quest, Moon Princess, Viking Runecraft, and finally Reactoonz and Reactoonz 2, which took the casinos by storm. 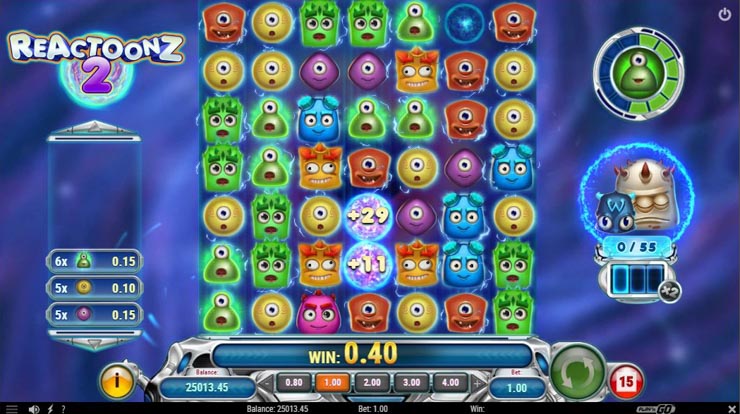 Some other interesting variations of late that fans of these types of slot machines should consider are Contact, Diamond Vortex, and Gold Volcano.

Unlike some developers, Play’n GO has no serious progressive jackpot slots. The only ones they have are from the three slots from the Wealth series: Celebration of Wealth, Beast of Wealth, and Temple of Wealth. The games are available at select casinos and are linked to a local jackpot from one operator.

Play’n GO is one of the game producers who go with the practice of variable Return to Player or RTP. In fact, one game can have up to five different RTP configurations. Usually these range as follows: 96.20%, 94.20%, 91.20%, 87.20%, and 84.20%. Which version of a game you get to play depends on the specific casino. Such info should always be available in the help file, which you can access by clicking on the “?” icon within a game. You can read more about why the RTP matters in our Best Payouts guide.

Play’n GO slots have proven to be extremely popular with online casino players around the world. Having enjoyed a similar success to Starburst, the Book of Dead slot has tremendously helped to put the company on the map and given it enough momentum to publish at a pace of over 50 new games a year. While it may have not been the innovation but clever marketing that led to the game’s success, it’s good to see that many of those fifty new titles share a good amount of unique content. How many of them will actually stick and whether the gamble on quantity will pay off is to be seen. As for whether or not you should try their games, the answer is certainly positive; but be careful to avoid casinos with Play’n GO slots which have lower RTPs because this can make or break the entire experience.

What are the most popular Play'n GO slots?

The most popular Play’n GO slots are Book of Dead, Reactoonz (2), Legacy of Dead and Fire Joker.
Does Play'n GO have progressive jackpots?

Play’n GO has local progressive jackpots on slots like Celebration of Wealth, Beast of Wealth, and Temple of Wealth.
Where to play Play'n GO slots for real money?

Play’n GO games are licensed in jurisdictions around the world and are translated into more than 40 languages. You should find them at the majority of online casinos, including in Belgium, Romania, and the UK.
Does the RTP vary from casino to casino?

Yes, Play’n GO games come with different RTP configurations, which operators choose themselves. These usually range between 94% and 96%.
Can you play Play'n GO slots in the UK?

Yes, their games are licensed by the UK Gambling Commission and are legal to play at the UK slot sites.
We use cookies on this site to enhance your user experience. By clicking any link on this page you are giving your consent for us to set cookies. Privacy policy Ok